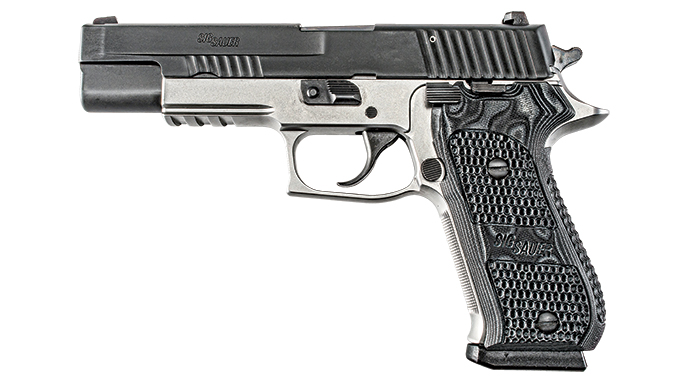 About the Sig P220 From  Ballistics Mag:

Originally released in 1975 and chambered in 9mm for use by the Swiss Army, the P220 is considered by many to be one of the finest handguns Sig Sauer has ever created. Its purpose was to replace the aging P210, which had been in service since the late 1940s. The P220 was an instant success due to its uncompromising reliability (just like a Swiss watch!). Early on, the P220 was available in multiple calibers, including 9mm, .45 ACP and .38 Super. The .38 Super chambering went by the wayside quite some time ago, and in the ’80s, the 9mm variant led to the development of Sig’s popular P226 model.

Today, the P220 is only available in .45 ACP. Well, we should write “was available,” because earlier this year, Sig unleashed the big-bore P220 Elite, chambered for the all-business, all-the-time 10mm Auto cartridge. Perfect for those looking for a pistol that can stop an intruder (or polar bear, for that matter), the 10mm version of the P220 will be released in four versions as well as a companion line of Sig Sauer Elite Performance Ammunition that includes two versions of the 10mm cartridge. We recently had the good fortune to spend some quality time with the P220 Match Elite Reverse Two-Tone version of Sig’s newest 10mm offering.

The success of Sig’s Elite series is based on its stainless-steel frame. The added strength from stainless-steel construction (compared to the lighter alloy frame of a standard P220) boosts weight, which helps lower felt recoil. Steel also means the frame will hold up better to the stresses incurred from a stout cartridge. This is a great benefit for .45 ACP, but an absolute must for the powerful 10mm Auto.

The Match Elite Reverse Two-Tone has a black slide and a stainless-finished frame with an Elite Beavertail to allow you to get a high grip, closer to the pistol’s bore line. This feature also won’t let the slide or hammer bite you while shooting. The high grip is a huge advantage since the 10mm creates a Significant amount of recoil.

The frame feels relatively thin and is fitted with excellent Hogue G10 Piranha grips finished in a tactically fashionable black and gray. They are cut to fit flush under the beavertail and extend around the sides. This is an excellent fitment with nearly no felt transition from grip to frame on the backstrap. The front strap is checkered with 25 lines per inch and will further aid in a good grip on the P220 Match Elite. If you have smaller hands, this gun will not be difficult to grip, though controlling the 10mm’s recoil may be a bit of a challenge.

Inside the large triggerguard is a Double Action/Single Action (DA/SA) trigger. Love them or hate them, Sig has always done a good job with these types of actions. The weight of the DA trigger pull is roughly 10 pounds, while the SA pull is 4.4 pounds. The DA pull of this sample was smooth as expected and allowed us to easily keep the sights on target through the longer and heavier stroke. Once in SA mode, the trigger was light and crisp. It’s hard to describe the break of a Sig SA trigger. It’s something you must feel to truly appreciate. Because of its DA/SA nature, the frame also features a decocker on the left side that safely drops the hammer without firing a chambered round. Right behind the decocker is the slide release lever, exactly where it has always been conveniently located on Sig pistols.

The front end of the frame has three rail sections cut into it. This allows you to fit a number of accessories, such as a light or laser. The P220’s steel, single-stack magazines hold a total of eight rounds, giving you a total complement of nine rounds if you load an additional cartridge into the chamber.

Holsters for the newer Sig P220 10mm handgun are not easy to come by, but we're now offering a ton of holster options for this pistol. Shop below: